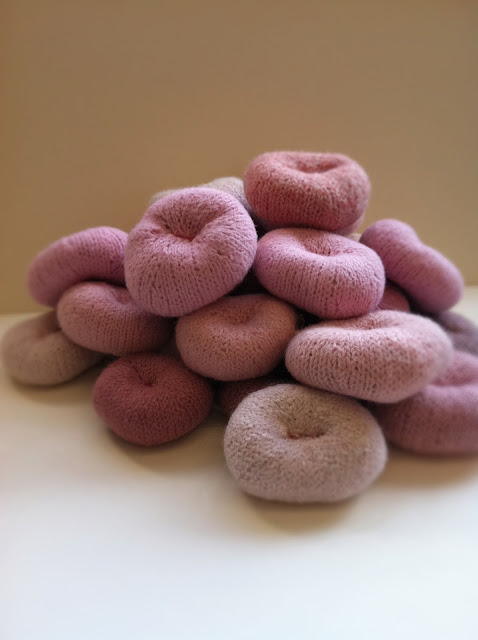 The pile is growing, with the count now at 27. I did have 28, but gave one to Annie Sprinkle. I met her at an art opening and she joked how "vulva art" was so done. It would follow that now is the time of the cervix. But why? What is the point of an art installation made up of a pile of felted cervices? For me, on the very surface, it is about absurdity. I've taken great artistic license in the design. They look a lot like donuts. And yes, that is really what they look like legs-spread-feet-in-stirrups-with-speculum-inside. However, they are always attached to the uterus above and the vaginal canal below. Like many other bits that make up our bodies, we usually don't think about the cervix unless something is wrong with it. Cervical cancer. An incompetent cervix, threatening premature birth. I came across this article, The Rebirth of Feminism by Emily Nussbaum in New York Magazine


Back in the seventies, feminists touted the slogan “the personal is political,” arguing that women had been trained to dismiss their own struggles as personal matters with no greater meaning. If women could share stories, they would find patterns. They could be allies instead of rivals.

What if we thought about the cervix? More over, what if we thought and talked about them? In the relatively short time I've made them, women have shared stories with me, private stories I wouldn't be able to discern by just looking at them. Issues concerning womens' bodies and health  are once again hot button topics among elected officials. I have many opinions and can get up on a soap box as much as the next person, but the point of the project isn't about proselytizing my particular point of view. The aim of The Felt Cervix Project is about engagement, creating, and community. Help carry on the conversation.
Posted by Sonya Philip at 12:01 PM

Add comment
Load more...
Newer Post Older Post Home
Subscribe to: Post Comments (Atom)
The Felt Cervix Project is a collaborative art installation. Instructions are given on how to knit and felt a cervix. This is an ongoing project. Each submitted cervix will be assigned a serial number. Direct questions to: feltcervixproject@gmail.com

Sonya Philip
Sonya is a fiber artist and maker of things living in San Francisco.